A 2017 Synopsis for the Editorial Team

Prior to our new formation, Aces Aspire needed…well…a little upgrade. As great as the website was, there was a lot of old and disused material. Articles from 2014 and 2015 were coming up on the front page as if it was the next big thing and there was quite a bit of junk. It wasn’t that appealing, if you ask a teen. A call was proposed and put forward, and a few young ladies joined the call; three of which put themselves forward onto the Editorial Team- a team which holds a great deal of responsibility, ownership and dedication. Within two weeks, the work began…

Elizabeth Omitogun, Ebun Bello and Laurelle Brant were handed, simply, one task: to help fulfil the Aces Aspire dream. That was to empower and inspire as many young people from Afro-Caribbean ethnic minorities as possible, for the better. However, this was somewhat impossible with an out of date website. The team began publishing articles, new material, in October. Our topics were limitless; art to education, politics to peer pressure, television to toys. We needed material that would appeal to the younger generation!

Funnily enough, aside from the crazy article writing schemes and the grand refurbishment of the website, our team has also gone out for some trips! Within weeks, we went on our first outing, to Twitter HQ! The event was celebrating women in tech, such as Angie Greaves (Presenter and broadcaster for Magic Radio, presenting for the ‘Drive Time’ show), Irene Moore ( founder and CEO of Digital Marketing London), Nilufar Fowler(CEO of the Worldwide Central team for the company, Mindshare) and Carrie Timms (The UK and Ireland’s Media Director at Unilever). It was truly informative and inspiring to see so many accomplished women  in such a competitive, male-dominated industry.

At Twitter, we met Pearl who just so happened to work at Facebook Headquarters. In no time, we were there too! We were given a tour of the day in the life of a Facebook worker. It was amazing! From the fast elevators, to the wall art, to the cantine!!!!! Pearl really looked after us and showed us around with patience, care and a smile. One takeaway, aside from a box of candy 🙂 was the great insight and information for the future that we were given. As for me, myself, I had a slight change in my choice of a dream career… 😉

The following event was a larger one, one that many may have attended. It was the Aces Aspire Awards ceremony! During that event, the Editorial Team got to see their work on a big screen, in front of an audience. It looked so, so good! It had a modern vibe to it and it looked very appealing to the target audience.

The final event of the year was a visit to Bobbi Brown, organised by Keziah Connections. It was a networking and a get to know event which included a complimentary makeover and lots of goodies! The artists were warm hearted, kind and very informative.

So, looking over this year, we can all say that we’ve done quite a bit in a short space of time. The team learned true time management, team work skills, and we worked on our writing skills too. We did work very, very hard. Albeit, we had a lot of fun.

Thanks guys, looking forward to 2018 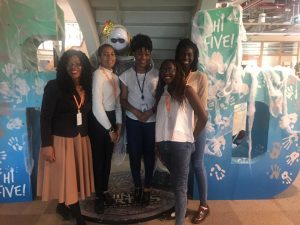 Have a great year everyone!