Hello, it’s me again. Join me on this adventure once more.

One day, at school, I was watching some vines. In the side bar on YouTube (where random recommendations and related videos appear) there was an anime vine. Before then, I had never even heard of anime or manga. I watched the vine, found it hilarious, watched some more, researched the anime that were featured, fell in love with anime and manga and then I wanted to be able to draw in a similar style. In HyperJapan (an annual Japanese exhibition, held in London) my mum bought me a chibi (I told you last week it means small or short person in Japanese) figure of an anime character called Ranka Lee in a Queen Outfit. 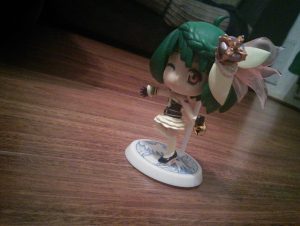 I then used the figure’s eyes as a guideline to what manga eyes could look like in their simplicity. From there, after watching more anime and reading several manga and teaching myself, I developed my skills in art and now I am confident in drawing manga style art.

Another good question that I would be asked usually is: “what do you draw?”

It is a broad question but it can say a lot about you. For example, someone could be a landscape painter and loves to draw night skies. In philosophy, a person would then guess that you are a peaceful and passive person.  If you have several art pieces on death or war scenes, you would be thought to have had maybe a troubled past or you’ve seen those sorts of things. It is said that art reflects who you are and your moods. Your artwork has a connection with you.

Me? I draw girls. I rarely draw male characters. And when I do, they look like girls. I guess that it is just easier to draw in likeness of your own self, especially as you (whichever gender you are) know the average figures and features that is expected from a male or a female and what an audience would like about your character. You would also know the gender based stereotypes about your own gender, so you could battle those stereotypes in your art if desired.

So yes, I draw girls. I have a set of characters which I made in 2014 and almost all of my art is based around those characters. I will maybe, one day, give you a long extract or talk about it more. 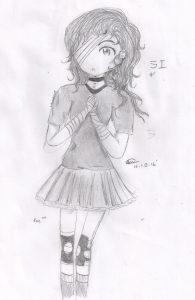 And yes, I haven’t finished creating the manga.

It will take much longer than expected.