Unless you’ve been quite literally living under a rock, you would’ve heard about the release of Marvel’s latest movie Blank Panther and it has caused quite a stir in our society. Why is this? What’s so special about this movie, you may ask. Let me tell you!

Black Panther the movie is based upon Marvel Hero Black Panther, who was brought to our screens in Captain America: Civil War in 2016. Black Panther follows a young African king returning to his home country, Wakanda, where he faces conspiracies to dethrone him and destroy his kingdom. This leads to the crux of the film, where Black Panther works alongside a CIA agent and Wakanda’s all-female special forces to thwart these plans of his enemies. 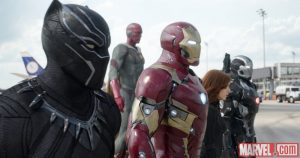 So What’s Special About This Movie?

When reading this synopsis, you may think what makes this movie so different? It has the same plot as your typical Marvel movie. Well, the significance of this movie lays beyond the movie’s plot. The movie primarily functions as a depiction of the redefining of the illustration of Africa and Africans alike in movies. It embraces African culture, not only incorporating it but using it as a positive centre point of the film. Contrary to the beliefs on Donald Trump, the film associates Africa with royalty and beauty breaking the box Africa has been placed in for numerous movies.

Not only does the movie contain household names like Micheal B Jordan and Lupita Nyong’o, but it’s cast is majority black. I found this especially inspiring as often in movies the black actors are a minority ethnicity within the cast; being able to see so many black actors and actresses landing roles for such a big movie highlighted to me that change is occurring. I’m not saying this movie will completely change negative stereotypes on people of Afro-Caribbean heritage or the prejudices, but it’s a step towards the right direction. One thing I saw awhile ago on social media was a picture of model Leomie Anderson: 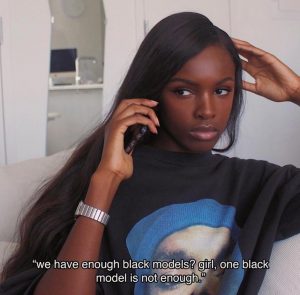 The reason I’m bringing this picture up is because so often in the industry including one person from an Afro-Caribbean background is believed to be more than enough for whatever it may be they’re produced. Even with my friends, I have joked about universities accepting some Afro-Caribbean students in an aim to fill their ethnicity quotas . The presence of various actors and actress from an Afro-Caribbean background drives home the fact this movie is really a symbol for a change that’s occurring. This and changed presentation of Africa in the media reminds us that Africa is a continent that is beautiful and flourishing, despite the many challenges faced in the various countries.

The movie has been available to watch in UK cinemas since yesterday (12/02/2018) so it’d be my hope that instead of watching it on our usual pirate websites (like we all often do), support the cause and watch it in cinema. £10 out of our pockets won’t destroy our financial situation and will add to the support behind this movie, in the hope that it won’t be the last of its kind. I myself have yet to watch the movie, but intend to and have high hopes that this movie will reach its hype.