Cambridge University: “It’s not about getting in, but getting through…”

On the 13th of February, Ebun Bello and Laurelle Brant from the Editorial team visited Cambridge University’s Robinson College. There, they were spoken to about Cambridge University as a whole, as well as receiving student advice on Cambridge applications and university life. One fact that kept cropping up, however, was the point that many people, especially from an Afro-Caribbean, tend to just sit and rest on their laurels when they reach Cambridge (or any other highly ranked Russell Group university for that matter).

Oxbridge is very well known for its worldwide academics, excellent students, superb facilities and for housing some of the most competitive geniuses in the world. Although it costs around the same amount to attend Oxbridge as any other university in the UK, there are many other benefits of attending Oxbridge, aside from gaining respect for attending such a well ranked university: There are 113 libraries and book grants, college owned accommodation (often meaning that it is cheaper than having to buy your own house/ flat by the university), you receive one-to-one or small group “supervisions” and tutorials, long holidays for paid employment and there are lots of bursaries and hardship funds available for students who need it. All that these universities are looking for are: Academic ability and potential, subject requirements and general suitability for a chosen course and genuine subject interest. With the entry requirements being A*, A*, A or A*, A, A for other courses, it all seems so possible and achievable- and it is!

On speaking to a panel of bright students who attend Cambridge University, we were told numerous stories about people’s “journeys” on getting into Cambridge. One thing was clear however; no matter where they were, they knew that they had to keep on working. One of the students spoke about how he was the first in his family to attend university. So, for him to be at any university, let alone Cambridge, he would have been very relaxed thinking, “Yeah, I’ve made it.”  However, as you may realise, university is not that rest-free. As good as getting in may be, your degree is going to last around 3 years, even longer if it is a medical degree. The key of university is getting through, because, to be frank, getting into Oxbridge is easier than it seems if one puts their heart to it. Not everybody, on the other hand, can keep up with piles of essays and work, pull endless shifts in the university library, attend all necessary lectures and keep motivated for years; studying the same subject every single day. Motivation is key!

Even so, getting in can be a very rigorous process. Throughout the talks, we were given lots of genuine student-felt advice, that was actually very intellectual and useful! To begin with, if one wants to attend Oxbridge, they need to start right away! It’s never to late, and neither is it ever too early. One student spoke about how he began preparing for university and taking in advice from when he was in year eight. Funnily enough, however, even if you start working from such a young age to prepare for university; your work ethic truly plays a huge part on whether or not you’ll be successful. You’ve been told many-a-time to “work hard!” haven’t you? Well, turns out that it’s not about working hard…the true key to efficient working is by working smart. The difference? It’s about working on things that you know that you need help on: “there’s no point in strengthening a muscle that’s already strong”. It’s about asking teachers and tutors for help and by using all resources and materials available. When one of the students asked who uses the examiner’s reports on past paper websites, almost nobody proved that they had. The examiner’s reports is, essentially, an answer paper that explains and demonstrates “modal” answers to the questions in the exam. And, in simple terms put by the students; “Use it!”

One idea, however, truly did make me think. One student mentioned the quote, “He who dares, wins.”  Even if you have your doubts for applying to Cambridge, or if think that you won’t get in, just try! Chances are, you may get in!

Nevertheless, drifting away from the motivational content; the day out at Cambridge University Campus was excellent. We were based in the Robinson college, not too far out from the Central Hub of the town. That was our primary location; we’d have our talks in their hall, as well as congregate in their meeting grounds. We had our lunch there too; there was no doubt that the food at this college was absolutely amazing! We had out tour around Queen’s college, and others visited King’s college. As a whole group, we had a walk around one of the many libraries, containing every book that was ever published in the UK! The day’s weather was quite cold, but it was a great insight into the daily life of a Cambridge student; one of which I definitely hope to be living. 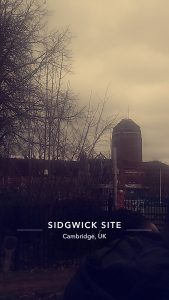 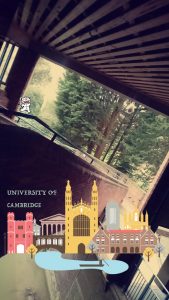 In conclusion, as read; You must believe in yourself before anyone else will. Anyone can get into any Oxbridge, or any other Russel group University for that matter, if the put their mind to it.

So, please, work hard, aim high, and you’ll definitely achieve what you set out to achieve!