Cristiano Ronaldo: The Road to Number One by Thierry 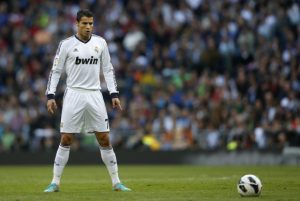 Cristiano Ronaldo was born on the 5th of February 1985. He is a 5-time winner of the UEFA Champions League and is the first to do so in May. He is one of the oldest players to score a hat trick in the world cup and he was quite young when he played his first one too.

Ronaldo has had a childhood that included poverty. He has shown us how strong anyone can be in such a saddening childhood. He loved football as a kid so when he got expelled for throwing a chair at a teacher he realised that he could dedicated his whole life to football to get money to save his family from distress.

Soon he started his career at a football club called Sporting CP, a Portuguese club. Ronaldo played so well that Manchester United became interested in him and signed him for a contract for 4 years as a 19-year-old and then he added an extra 2 years before moving to Real Madrid,; he was bought for £80 million, becoming the most expensive player ever at the time (2009). At the age of 19 he even was playing for the Portuguese National Team. When Ronaldo moved to Real Madrid, he put all his knowledge learned from Manchester United and put it into work at his new high-class club, soon he became a top player in the world rankings. He shows passion for the game and that is why most managers and clubs like him. Thanks to them he is a great player and now he is performing at a really high level. Now he has children named Cristiano Ronaldo Jr and Mateo Ronaldo. Ronaldo Jr has the same passion for the number one sport as his father did when he was young so that might get him the feeling that he might be a professional footballer too!