#Doctor13 and the problem with labelling

So, the new Doctor Who is set to be a woman.

I watched the Wimbledon Men’s tennis final on the 16th of July purely because I had been informed that the 13th Doctor would be announced afterwards, and I was not disappointed. Jodie Whittaker is set to begin her tenure as the Doctor in August 2018, with her first ever appearance being in the regeneration scene of year’s Christmas special.

Guess how some people reacted?

A host of people suddenly rose up to declare that the Doctor couldn’t be a woman because ‘he’s always been a man’, ‘political correctness should not exist in space’, and ‘hundreds of little boys are now losing a role model’. However, other Doctor Who fans have welcomed the change, and ridiculed the ‘fake fans’ who have been vocal about their dislike of the casting: 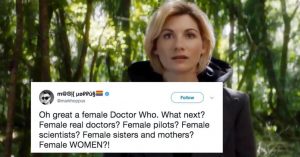 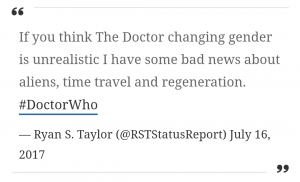 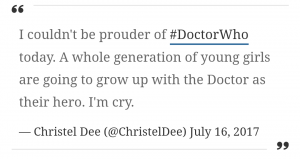 Several former Doctor Who actors have also chimed in to give their blessing to Jodie Whittaker, including Tracey Ann Oberman, Colin Baker, Freema Agyeman, Matt Lucas, and John Barrowman.

Doctor Who casting choices have always been met with a certain degree of trepidation, but the amount of adversity to this choice is unprecedented. The choice quickly became national news. It was on the cover of every newspaper I saw the next day and was a trending topic for days afterwards. Everyone had something to say and had no qualms about saying it as loudly and prominently as possible.

I haven’t actually expressed an opinion on this, mostly because no one’s asked me, but I personally can’t wait. Jodie Whittaker is an astounding actress, as she has exhibited many times on Broadchurch and the new BBC drama, Trust Me. People always have a complaint about the Doctor – David Tennant was too Scottish, Matt Smith was too young, Peter Capaldi was too old – and each and every one of those Doctors was beloved, with the news of their leaving greeted an amount of sorrow equal to news of an approaching earthquake.

This also got me thinking. Why has the media already pinned Jodie in the ‘first female doctor’ box? Have we already limited her to her gender,  so that she starts her role already at a disadvantage? I know that this happens with any change, but why?

The unknown is scary to human beings. I suppose that’s why we try to box changes – ‘first African President of America’ and ‘first woman to work at the International Space Station’, to name a few examples. By restricting people like this, we limit the impact they can have on the world around them. Margaret Thatcher is one of the longest-serving and influential prime ministers of our time. Why do we insist on referring to her as ‘the first female prime minister’? I’m not saying that we shouldn’t recognise the breakthroughs that people are having every day, but those labels shouldn’t become something attached to them – you judge them based on their actions, not how they look.

In regards to Jodie Whittaker, however, I have no worries. I look forward to her take on the doctor, and I’m sure she will be