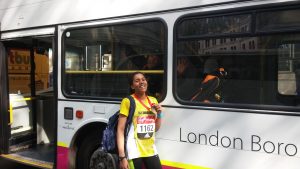 Excellence in Education very own maths genius ‘Laurelle Brant’ takes on the London Mini Marathon. Laurelle is one of the youngest people to ever pass GCSE Mathematics and was awarded an A grade in Maths at 9 years old.

I managed by my own surprise, to be in 1st place for my borough – Redbridge. It was a miracle, in my genuine opinion. We were given medals and ‘super healthy’ food – which didn’t taste as bad as I thought it would.

The London Mini Marathon was designed to inspire the “non-athlete” to run and get active. Although, especially among my peers, that does not seem to always be the case. I recall one person telling me that it was actually just ‘sad’, for the participants and for themselves: considering that the runners had to wake up to catch a 7 am bus and then run a 5 K all before midday. Hopefully, my experience of running the London Mini Marathon three times inspires us all to run.

This year, although a familiar race, was slightly new for me. Not only was there a smaller team of 6 per age category (which did make the team harder to get into), but I was running in the Under 15’s race. I have been running in the Under 13’s previously and I was unsure about what the race would be like. I was rather excited, discarding the fact that I now had a ‘sunshine yellow’ t-shirt to wear instead of a pastel blue one. This age category was much calmer than the ‘younger’ one. 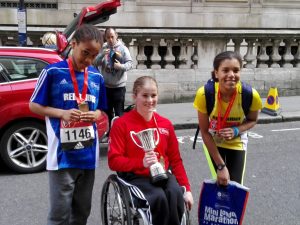 I could hear the Under 13’s all asking one another if they’d ran that race before and discussing whether puberty affected their running. However, in the Under 15’s group, everyone was much quieter.

Friendship groups clumped together, selfies were on the rise, practically every girl was re-doing their hair into two french braids and writing their team name on their legs with paint.

As usual, I was at the back on the starting line. Not because I am slow, but because everyone is eager to be at the front line before the race starts. When that horn went off, Sparta had unleashed.

In all honesty, I am still surprised that no one was injured in those first 30 seconds of the race. Pushing, shoving, tripping, falling … Description complete. 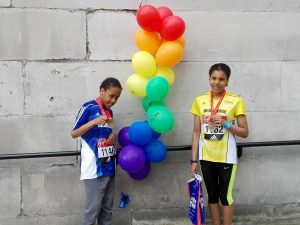 The race felt relatively short this year, although the distance remained the same. Maybe it’s because I’m getting taller.

I always look forward to running through the Lucozade tunnel. It was a little tunnel under an existing bridge, that was filled with music, colourful lights and a big screen at the end showing ourselves on it.

I finished the run in 21:21. I was happy with the time. I may have been faster if my laces on my right foot did not untie themselves. 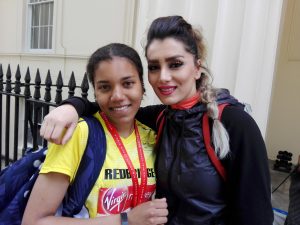 The run, itself was exhilarating. I had forgotten that I was running within a minute or so. I found the run relaxing. I was enjoying London’s scenery to even remember that I was running. It was breath-taking; running the same course that other well-known athletes would run is a wonderful feeling to have. BBC were at the race and like most runners, I was hoping to be interviewed. Even though it didn’t happen, I was still happy and honoured to be featured on the TV screen for as long as I was (which was less than 3 seconds).

All in all, I really enjoyed running the London Mini Marathon. It is not necessarily because it gives me a chance to show of my calf muscles, my speed, my cardiovascular endurance; but because the experience allows me to be an example to others. I would like to see a more active ‘younger generation’. I would like to encourage everyone to get up and get active! You don’t have to run a 26 K. A 15 minute brisk walk is exercise.

We can all do it! 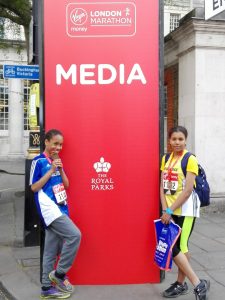