There’s a reason for that.

As well as sending an empowering message to the young people of colour in the world today, it’s also a very good film. It’s really a win-win scenario.

“Only YOU can decide what kind of king you want to be.”

This film’s plot focuses on T’Challa, who we saw in Captain America: Civil War trying to avenge his father’s death. This film deals with him returning to Wakanda to decide what kind of king he wants to be, and how he will make up for his father’s mistakes.

This film kept me interested the whole way through. It had its emotional moments, the use of humour was fantastic, and although there was not much shock factor in it, I think that’s why I liked it so much. I was kept comfortably on the edge of my seat, although at some points I was very alarmed for the safety and well-being of the characters.

I think this is also a good time to mention that a large part of why I was engaged throughout the film was the lit soundtrack. It got to the point where I was literally boppin’ in my seat, I loved it so much. So there’s that as well.

The world is changing. Soon there will only be the conquered and the conquerors. You are a good man, with a good heart. And it’s hard for a good man to be a king.

This film’s big talking point was the fact that it was the first Marvel film with a predominantly black cast. It really helps the cause that all of the characters were acted beautifully; everything felt very realistic and natural. The characters are this film’s strongest point. 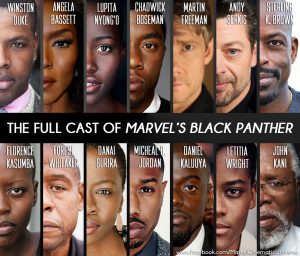 This doesn’t even include all the minor characters and extras! 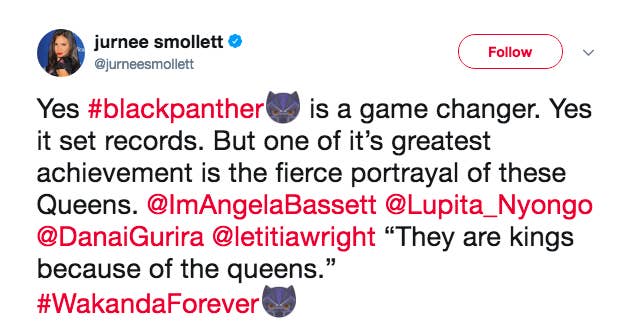 Let’s start with the ladies. People have pegged this as the ‘black empowerment’ film so quickly that no one seems to have noticed that there is a lot of black female empowerment in this film as well. All the women in this film are either warriors, leaders, spies or scientists, and they are fierce. They have beautiful natural hair, beautiful natural skin and they don’t let anyone tell them what to do.

However, the best character (in my opinion) was the villain. The problem with superhero villains is that sometimes they are too one-dimensional; you know, the ‘I want to destroy/ rule over the world’ types that are so typical of superhero films. With the best villains, like Eric, you want them to be able to live (because you feel sorry for them and you understand why they did what they did) but you understand why they have to die (because they wouldn’t change because they’re too traumatised by past events). Michael B. Jordan delivers a brilliantly convincing villain who gives us the scary and the misunderstood in perfect portions.

I was seriously excited to see Black Panther.

The problem with getting that excited for something like this is that it is quite likely to let you down. Luckily, Black Panther lives up to the hype. I can honestly say (and believe me, I don’t say this a lot) that this has to be one of the most enjoyable films, if not the most enjoyable film I have ever seen, in terms of how I felt coming out of it, and I’ve seen A LOT of films.

I came out of Black Panther feeling like I could take on the world.