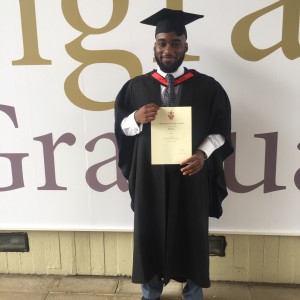 First class graduate Dami salami, speaks about his journey  through university,  overcoming the odds, and his quest to become an investment banker.

What is your name?

My name is Damilare Salami.

What is your career aspiration?

What university did you attend?

I just graduated from the University Of Essex.

What was your discipline?

It was very challenging, but, at the same time, very thought provoking, as well as, pragmatic. It provided tools, which in regards to my everyday life interests, are very useful, such as for being able to read the financial times and Forex trading.

Why did you choose that course?

I chose my degree because I was under the impression that, it was the best course to propel me into investment banking.

My school days were okay, but, more emphasis was laid on my social life, rather than academia. A fault, which was down to me. 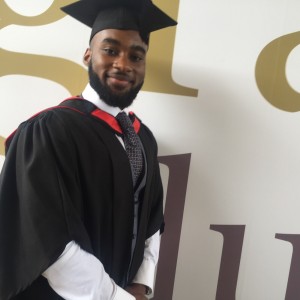 Going to University was great. I found that within my course, I had a lot of like-minded people who have had similar backgrounds to me. I have also been able to meet different people from very different backgrounds and learned how to relate with them.

Some young people think it is no longer worth going to university. What do you think?

I think the choice of going to University depends on your career aspirations as an individual. Furthermore, I think if young people are given adequate information about University, they will be better equipped to make that decision.

It is important, that I state that, there is nothing wrong with not going to University. There are lots of young people who are well informed about university before attending. This is not due to any influence from school, but, from family members who have already attended university. Therefore, those who have no family that have attended University are at a disadvantage.

What do you wish you had known before you started university?

I wish I knew that re-taking a year was not shunned by Russell group universities, as I know various students in the top 10 universities, who have had to re-sit a year.

What do you do when you are not studying?

Whilst I have been at University, I have started my own society, which teaches students how to trade in the Forex market. In addition, I have also began my own showcase, known as ‘Hear every rhyme’.  This is a platform to showcase Essex’s very best talent in spoken word. I also trade Forex in my free time.

What has been your biggest achievement/ challenge to date?

My biggest achievement to date has to be, setting up my own Trading school.

Who or what has inspired you the most?

My biggest inspiration to date would have to be my mother, as she has overcome so much in her life to be where she is today.

What is it like growing up in a single parent household?

There have been times when it has been very tough, but, there have also been some very good times, as it has brought my mother and I closer than we would have been, if I had had both parents.

Did it have any impact on your education or social life?

It definitely had an impact all the way through my education and social life. It has been difficult having to listen to people at school, or around me, talking about life with both parents. Furthermore having a father who was consistently in and out of my life further exacerbated the situation. 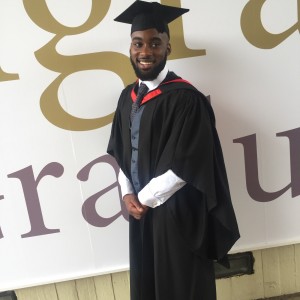 How do you feel when people talk negatively about children who live alone with their mothers?

It really infuriates me, simply because, a mother should not be blamed for a child’s action. A mother who has to work all the time to feed her family has no choice but to do so, which leaves the decision as to what the child wants to be in his/her own hands. Some people might suggest a child may be too young to decide such a thing, but that is the way it is.

If you had to go back and say anything to your 16 year old self what would you say?

I would say that,’I should take education a lot more seriously, because, whatever decisions I make today will have a direct effect on where I want to be in my future, and, who I want to become’.

How did you become involved in ACES?

ACES Youth Project came to my secondary school and developed relationships with some children in year 9. I was one of those children.

Do you have any words of advice for young people today?

I will say to every young person today, that with everything you do in life, always have targets and goals, be it in the long, or, in the short term. Young people need to put greater thought into their future, and, their aspirations.

If you ruled the world, what one thing would you change?

I would cap net-worth at 10 billion, which would mean that, the rest of a person’s net-worth would be disseminated across the poor.