How Sheku Kanneh-Mason Inspired Me by Luke Smedley

Sheku Kanneh-Mason is a young, aspiring cellist, and the first black winner of ‘The BBC Young Musician of the Year Award’ since its introduction 38 years ago. Kanneh-Mason grew up in Nottingham, in the East Midlands, with his parents and six siblings. His father, Stuart Mason, was a business manager, and his mother, Dr Kadiatu Kanneh, is a former university lecturer. 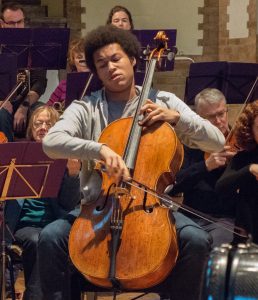 Kanneh-Mason began to play the cello when he was only six years old, through his work ethos, practice and motivation he passed his ABRSM Grade 8 exam at the age of nine, attaining the highest marks in the UK.  Furthermore, the gifted cellist won a Junior Scholarship at the Royal Academy of Music whilst receiving his traditional education at Trinity School in Nottingham. In a recent interview, he said Jacqueline du Pre and Mstislav Rostropovich are his “most prominent ‘musical heroes'” – both being bold figures in the world of cello.

In 2015, the young cellist and his siblings appeared as competitors on Britain’s Got Talent, competing as The Kanneh-Masons. He later told The Observer that “appearing on Britain’s Got Talent was a great experience for getting used to performing in front of lots of people and cameras.” More recently, Kanneh-Mason played the cello at the wedding of Prince Harry and Meghan Markle on 19th May 2018, after he was spotted by Prince Harry at a local charity concert.

Sheku Kanneh-Mason was also a member of the ‘Chineke! Orchestra’ which was founded by Chi-Chi Nwanoku for black and ethnic minority classical musicians. He told The Guardian that:

[quote]Chineke! Orchestra is a really inspiring project. I rarely go to a concert and see this kind of diversity in the orchestra or audience, it’s important to celebrate black composers.[/quote]

In January of 2018, he donated £3,000 to his former school to finance ten students’ musical education, allowing them to continue with their own cello lessons.

Now, Sheku Kanneh-Mason has an album compiling over twenty songs and has gained major popularity in the UK.

I have been inspired by Sheku Kanneh-Mason because he has achieved so much in the music industry in such a short time. The support and sacrifices his parents have had to made to invest in his music career, are been very inspirational. Likewise, his drive and determination has encouraged me to do the same.

Similar to Kanneh-Mason, I started playing the piano at the age of six, and with my mother’s support, I am now working towards grade 5. Kanneh-Mason’s journey has taught me determination and the value of practice. With all the support and sacrifices my mother has made to enable me to get to this level, who knows one day I might be one of the greatest pianists.

Through Kanneh-Mason’s own immense rise to musical prominence, he continues to inspire other young musicians like me every day.