Young writer and author of Anderson I: The Acute Case of Anthrax, Omar K. Alleyne, talks to ACES Aspire about his work, inspiration and book. Check out this inspiring interview. 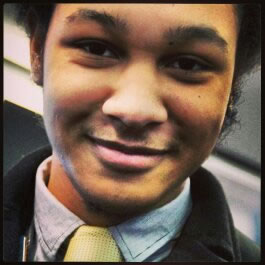 Hi Omar, How old are you?

What do you currently do?

I am a writer for gaming news website Kaichicast Gaming and T-shirt designer at 5 Thousand Clothing. I also study Fashion Design at Birmingham City University and have completed my first year

Who is your inspiration?

Benjamin Zephaniah and Malorie Blackman certainly helped me feel that it was ‘okay’to be black and a writer who wrote about something other than baby mum’s, gangbanging and cheating the law.

Literary wise, William Shakespeare inspires my character and story development. His cyclic pattern using the ‘order-chaos-order’structure is prevalent in a number of his plays and he’s by far and wide the most famous writer of all time in the English language.
Genre wise, Drew Karpyshyn and Mac Walters’work in the gaming franchise ‘Mass Effect’are my most recent inspirations alongside the more internationally renowned George Lucas for his work on the cult classic, Star Wars.

Why did you write your book?

The original reasoning behind the book was for a school project named the EPQ. The idea was that you can do almost anything you wanted, as long as you had the paper work alongside it. I decided to write the book for the project and the rest, they say- is history.

What is your book about?

Anderson I: The Acute Case of Anthrax is a Science Fiction novel set in a dystopian future run by a newly installed Monarchist government with a power complex and a need to tell everyone about it.

The protagonist, Doctor Martin Anderson is a military doctor, who, despite his problems like his distaste for authority, dysfunctional relationships and explosive anger, functions like a normal…human being (With extensive help from his friends Phelps and Anya).

As Anderson and co investigates patients’ unusual symptoms, Anderson uncovers a series of secrets that not only force him to question his role as a doctor, but as a citizen in this ever growing and increasingly hostile empire.
The book goes on to expose the topics of institutional racism/xenophobia and most importantly, friendships and our sense of civic duty. The book also highlights perception and time.

Who is the book aimed at?

They book is aimed at young adults and people new to the Sci-fi genre.
The reason why is simple. Science Fiction already has its hardcore authors and books. For people who aim to get into the genre, there are very few books that allow you to just walk into the genre and get your feet wet. Anderson I aims to be the book that someone recommends to someone else when they say “I want to get into the sci-fi genre, but I’m not sure, what should I read?”

What do you hope to achieve?

Fame and fortune is what I want to say, but in truth- it’s not what I’ve ever envisioned. I know I would be happy to go online and see the book trending on a social media website with people engaging various theories of their own interpretations. I would love to go on youtube and see fan made short movies. Honestly, I hope to have made something that captures the public’s imagination, to have something that I feel would be more rewarding.

What is your favourite bit of your book?

Without spoiling too much, my favourite part is in the final chapter of the book. Anderson at this point has seen so much happen to his friends and even himself. He’s a rational man, compelled by science that has been pushed to a breaking point. It’s his very emotional reaction that still has me, the writer, dumbfound, even after reading it multiple times.

Anderson I: The Acute Case of Anthrax is currently exclusively in an e-book format and sales at retail for £3.50 or $5.99 on Smashwords in all known e-reader formats. The book will be on sale to Kindle, Apple, Kobo and other stores later this summer.