James Mutinda is Rising to Inspire his World 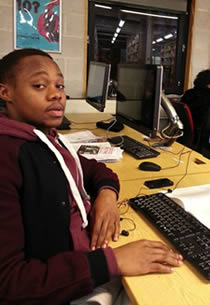 ACES worked with James when he was in Year 9 (2007). He was a bright student, but was working well below his potential. After various mentoring sessions, trips to universities and introductions to high achievers and professionals, James started to realise his potential. Let’s hear from James and find out how he is doing 7 years later.

Who is your inspiration?

What grades did you get for your A-Levels?

What was your greatest struggle when you were a student?

Revising! I really struggled with the concept for a very long time because no one really taught me how to revise. Rather I was simply expected to do it without any guidance.

Initially my school days weren’t the best. I didn’t like school for a while but when I began to appreciate learning and made the right friends, I began to enjoy school.

What is your greatest achievement to date?

My greatest achievement definitely has to be completing my A-Levels whilst in employment and despite missing year 11.

If you had to go back and say anything to your 16 year-old-self, what would you say?

There many things I would like to say to my 16 year-old-self. Most importantly however, I would say: don’t spend too long thinking about the end goal, although the end goal is very important, simply write it down and have it nearby for reference. The main thing is to do the little things every day, they are the ones that matter. Life is a composite of habits so please get into the right habits because sometimes the end goal may appear so great that it overwhelms you. Put in the work today, tomorrow, the next day and eventually you will get there.

Do you have any words of advice for young people today?

I’m only 20 so I am still relatively young, well I hope I am. There is however one piece of advice that has really helped me and I would like to share it. You are old enough to make something of yourself but young enough to make mistakes so dare to dream! We are part of the most connected generation that has ever existed, make the most of it.

If you were king of the world what would you change about the world and why?

There are many things that aren’t right and I would like to change. One thing however that I would change is people’s ability to understand each other, I would make sure that everyone understood each other to the highest degree possible. It would solve numerous prevailing issues. It would bring an end to many wars as both sides would understand the position the other is in and why they act the way they do.

It would mean that the head-teacher about to exclude a student fully understood why the student behaved in a certain way whilst ensuring that the student understood why the head acts the way they do; compromises would be reached much easier and people could move forward faster. Many issues are down to misunderstandings, take misunderstandings away and you have less issues.

How has ACES helped you?

ACES has enabled me to grow into a well-rounded individual. Although ACES worked with me in year 9, its alumni system has enabled me to remain part of the organisation throughout the years providing mentors to help make the most of the opportunities I have been blessed with.

ACES gave me the seeds I needed to complete my A-levels with 3A’s but it also enabled me to acquire a mentor and have lunch with a millionaire! It has equipped me with the needful tools to sail through the university while at the same time providing me with the advice not taught at school on how to cope with the changing world. I have come to understand that we are part of the most connected generation and how to make the most of this as ACES has allowed me to tap into a network of successful entrepreneurs, accountants, lawyers, bankers and the like.