Our visit to Bobbi Brown®

A month ago, the Editorial Team was taken on an evening out in Soho to visit Bobbi Brown®. The event was organised by Keziah Connections and it was a makeup, beauty and networking event. 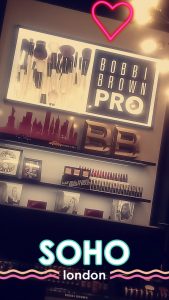 Upon arrival, I found that the shop’s top floor was filled with visitors from all over London, some even travelled huge distances to attend. All of the women were keen to try the makeup, see the products and to meet the staff and the people. The furthest wall of the shop was lined with a bench and a few high seats, in which some visitors could have a complimentary Bobbi Brown makeover; from the eyes, to the on fleek brows, the lips and the skin. I truly loved the atmosphere before the event had even really started! After finding my team, trying some of the nibbles and turning down a glass of Prosecco (which I would have done, whether my mother was standing behind me or not…), we all sat down for the main event feature.

The speaker was one of the makeup artists who worked in that store. She spoke with experience as she demonstrated some of Bobbi Brown’s beauty tips on a participant. She tailored her advice to those with oily, dry and sensitive skin. Questions were asked about the company and the whole makeup and business process. Towards the end of the presentation, the participator was shown to us and boy, did she look good!

Afterwards, the networking and makeovers resumed. I, myself, and Elizabeth had a little makeover. Elizabeth did the whole shebang and I just had my eyebrows filled in 🙂

Bobbi Brown’s event was quite informative and fun, as well as educational. The science behind the makeup became quite clear and we all learned numerous makeup techniques. The people we met were great too. The artists were friendly and open. The Editorial Team had a lot of fun too, we looked so glam! 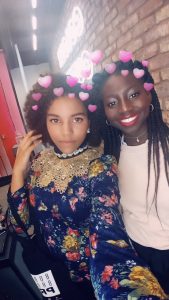 What I liked the most about the event was the fact that we got to meet the makeup artists. However, the one thing that I’d like to point out was the fact that the artists would ask you about your skin. They wouldn’t look, test and start painting your face; they’d ask what you wanted, they’d ask about your skin type and they’d talk to you about what they were doing. I thought that it was a great way to build a relationship with customers, especially as one’s skin is quite precious! 🙂

The event was very, very fun and we’d all hope to go there again soon! Thank you Keziah Connections for organising the event!