“We’ve built a whole new way to explore the world! See what’s happening, find your friends, and get inspired to go on an adventure!” said the company in a blog post announcing the update.

When they first use the feature, users can select whether they want to make their location visible to all of their friends, a select group of connections or to no one at all, which Snapchat refers to as “ghost mode.”

If there’s a major event or breaking news taking place that lots of people are documenting on Snapchat, a patch of colour will appear on the map identifying the hotspot. 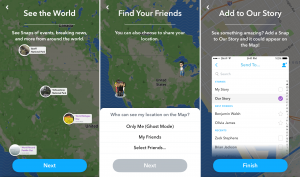 The map also incorporates “actionmojis”, a new type of personalized avatar that Snapchat automatically creates by analyzing the user’s location, time of day or speed of travel. So some people will appear in an animated car, for example. The actionmojis appear on the map when a user shares their location and disappear when they’ve been offline for several hours.

People who use Snapchat can choose exactly who they want to share their location with, if at all, and can change that setting at any time. It’s also not possible to share your location with someone who isn’t already your friend on Snapchat, and the majority of interactions on Snapchat take place between close friends.

To access the map, users open the app and pinch to zoom out on the screen. This then displays a map of the local area. Users can change whether or not they are visible to others within the app’s settings.

However, the new feature has raised concerns among parents who fear it could be used to stalk or bully others. 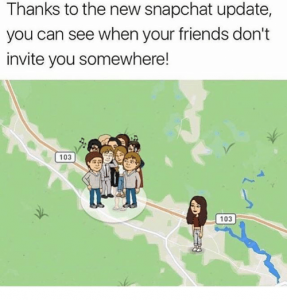