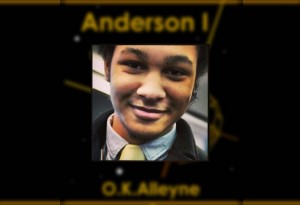 Over a year ago, we met Omar K. Alleyne, the young entrepreneur, writer, and author of Anderson I: The Acute Case of Anthrax. Since we last spoke with Omar, two young ladies, Fatimah and Jada, have read his book. They were enthralled by its plot and main characters.

For Black History Month, we are sharing Fatimah’s detailed analysis of Anderson I: The Acute Case of Anthrax, followed by Jada’s synopsis. We hope you will enjoy their review – and check out Omar’s book for yourself and send us your review.

1. Title
Anderson I, the Acute Case of Anthrax 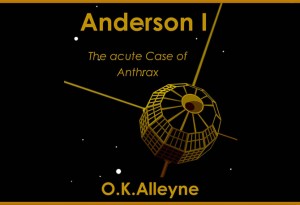 What is the book about?
The book is a dystopian science fiction novel about a doctor called Martin Anderson, who works aboard a ship called the SS Klipspringer and looks after soldiers. His life is dandy, until an officer is admitted into the clinic with an unidentified disease. Anderson and his assistant, Anya Belle, work hard to find the cure. While doing so, they are deployed to a new planet to retrieve some scientists from a previous mission to a different planet. Many exciting encounters happen that leave your heart pumping and breathless for more.

3. What did you think of the main character?
The main character was bad-tempered and slightly sarcastic, and he made me laugh on more than one occasion. I got the impression that he is fiercely loyal to those he considers worthy, but has been warped by his experiences, which have left him bitter.

4. Which character could you relate to best?
The main character, Martin Anderson. I saw a bit of myself in him, and his thought process was frighteningly similar to mine.

5. Were there any other especially interesting characters?
All characters were special in their own right, but no other character stuck out to me.

6. From whose point of view is the story told?

8. How did the main character change during the novel?
I saw his temper improve considerably and he developed as a leader and became committed to the team he was leading.

9. What was the book’s central question, and how was it answered?
The central question involved the mysterious illness that were people coming down with. It was answered in a way that didn’t seem irrelevant to the story.

10. Did you learn something new from the book?
No, but it was still exciting.

11. Was the book different from what you expected?
Yes, I’d say so. My initial reaction was that it would be very cliché, but that wasn’t the case at all.

12. Was location important to the story?
Yes, a lot of significant events happened in the story, and the location was very important.

13. Was the time period important to the story?
Yes, as the story itself was futuristic. It would be quite hard to imagine the circumstances in the book unfolding in the present.

14. What alternative title would you choose for this book?
Anderson and the Mysterious Disease

“But my arm stretches the breath of space. My fist can crush a system and my eye can see far beyond the borders of what we know, for even the tiniest of parasites shall be quelled beneath my feet.”
This powerful speech displays arrogance, and is designed to instil fear.

16. Share a favourite scene from the book.
In the first chapter (excluding the prelude), when Anya walks with Anderson, there is a hint of something that could be more than friendship.

17. What did you like most about the book?
The plot was action-packed, with some humour thrown in. A nice balance.

18. What did you like least?
There were times where I was confused and had to double back and read a passage again. It would have been a bit better if the author had explained things more clearly.

19. Did you like the way the book ended?
It was the first of a series, and the end left me burning with questions. I wouldn’t change a thing.

20. What do you think will be your lasting impression of this book?
I’ll remember it as very action-packed, with unexpected twists.

21. What did you think of the cover?
Very simplistic. The colour scheme was very complementary.

22. Would you recommend this book? How would you rate it? ***
I would rate it a 3 star (***), as there were some parts of the book where I was particularly confused. There were also a few spelling mistakes. However, I still would recommend the book, as it brought on a roller-coaster of feelings.

‘Anderson I: The Acute Anthrax’ keeps the reader on edge and in suspense with an exciting setting and storyline. Set far in the future, this book draws the reader into a new world where the impossible is possible. A well-written book, not too long, but well composed. I give this book a 4 out 5 rating.