On Tuesday 17th, the Editorial Team visited Twitter’s Headquarters in Central London. The seminar was on Twitter Women and women in the technological industry. The guest speakers were Angie Greaves (Presenter and broadcaster for Magic Radio, presenting for the ‘Drive Time’ show), Irene Moore ( founder and CEO of Digital Marketing London), Nilufar Fowler (CEO of the Worldwide Central team for the company, Mindshare) and Carrie Timms (The UK and Ireland’s Media Director at Unilever). The main points were about women in technology and the issues and hardships associated, as well as giving tips and advice to fellow women. 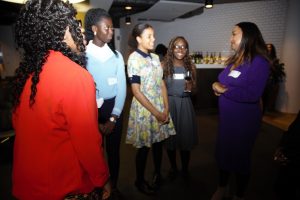 For a start, the panellists had to introduce themselves and share their stories. It was interesting to notice that most of them had no idea that their current careers would be for them at the time. As, earlier on in time, women were not often encouraged to be involved in STEM, many were thinking of more “womanly” careers. Moreover, the panelists were of Afro-caribbean and non-white descent. This meant that the discussion over whether race played a part in their careers was rather prevalent. One of the panelists spoke about the fact that many of her employee’s families were rather surprised to see her, a black woman, as the boss.

“Sometimes, employees would take their families into work. When they introduced me to them, they would say in exclamation, “That’s your boss?!!”’ 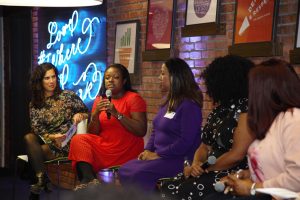 Nevertheless, the opening discussion was about mentorships. We were able to distinguish between a good and bad mentorship programme, why they’re important, and the difference between a mentor and a sponsor. This was an incredibly useful discussion as we learnt that, actually, some mentorships work better in informal circumstances, i.e. with friends maybe. Also, we learned that there are so many dangers involved with seeing mentorships as just an activity that you just have to do, like something on an agenda. Mentorships has to be something valuable, otherwise you should end it.

During the session, there were so many spoken examples of misogyny in the workplace and racism all around, it was not at all hard to think about what needs to be done, even in the modern society that we live in. Women over the years have been made to think that they have to be perfect  in order to be eligible for male-dominated jobs:

“We, women, have grown into a misconception that we have to be 100% qualified to run for a certain job. However, men who are only 20% qualified are the ones sitting in those offices that you want to be in. If you wait till you’re 100% ready and qualified, you’ll be too late. Move with the world or it’ll move without you. You’ll become ready for that job if you just go ahead and go for it now!”

There is nowhere near enough women, let alone women of afro-caribbean descent, in such technological fields of work. The session truly made me realise how there is so much to be done in our world, while celebrating the women who had made it. From making life easier for women looking for childcare and maternity life to trying to prevent such discriminatory views in the workplace. Then again, one of the panelists said:

“If they don’t like you, that’s their problem. You just have to smile sweetly and change their views on you.” 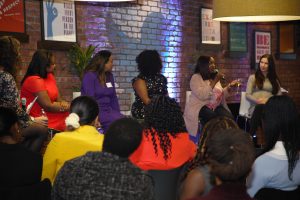 The biggest point, however, that I took from the event was that you should never fit into someone’s fitted expectation of you. No matter what, you are yourself and you should be proud to be a young woman of afro-caribbean descent. It should not be your responsibility to please everyone. But, also, the seminar proved that we need a lot more women in the technological world. It is there, but we just haven’t necessarily found it. It is understandable that some women aren’t always encouraged to even search for such fields, but it is our aim to ensure that every woman has access and complete rights to be in this field of work and will enjoy and thrive in it.

“It’s like the secret service. We’re out there, but not many can find us…” 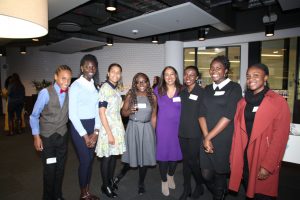