Why Zendaya Coleman is a Great Influence on our Youth by B. Yakubu

Why I’m Inspired by Zendaya Coleman

“I love hearing educated people speak and just shut everyone up… knowledge is always the loudest voice.”

Blessing shares why Zendaya inspires her and why Zendaya is indeed the “most influential Teen Star of all time”.

Zendaya Coleman, born September 1st 1996, is an American actress and singer who started acting as a child but she didn’t get her first TV role until she was a teenager. Before that, she was in a dance group called Future Shock Oakland which allowed her to perform on Kidz Bop and she was also in a series of TV commercials. Her big break came when she landed the role of Rocky Blue on Shake It Up, the show was very successful and ended after 3 seasons. She also began her singing career by releasing singles “Swag It Out” and “Watch Me” in 2011. The second was a collaboration with Bella Thorne.

“I have standards I don’t plan on lowering for anybody… including myself.” 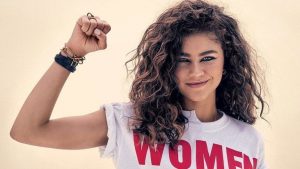 Zendaya also released “Replay” in 2012 which reached number 40 on the billboard hot 100 charts in America. After Shake It Up ended, Zendaya joined Disney again with her role as K.C. Cooper in the show K.C. Undercover. She is also famous for portraying the character of Michelle “MJ” Jones in Spiderman Homecoming and Anne Wheeler in The Greatest Showman.

Reasons by Zendaya inspires me

Zendaya inspires me because she:

“I wanted to show a lot of young ladies that you could be beautiful and just as stunning as everyone else without showing every single inch of your body.”

In connection to feminism, Zendaya participated in the Women’s March in January 2018. The aim of the march was to raise awareness about women’s rights, and seeing Zendaya take part in that march not only helps me, but also young girls, to see that feminism is something that needs to be taken seriously. Zendaya has also spoken about body positivity and how people should love themselves and their sizes. This was evident when she called out the magazine Modeliste for photoshopping her pictures to make her look slimmer than she actually was. Appalled by this she took to her Instagram to talk about the magazine and to also post the original untouched picture.

Zendaya used to have a fashion line which she had American sizes available from 0-22. This is good because it helps her fans, some of which will be young girls, to see that no one is perfect and that they shouldn’t worry about trying to look slim which often leads to eating disorders such as anorexia and bulimia.

“It’s so hard for women to be happy for each other, like genuinely happy. Once you find that, you know you’ve found true SELF happiness.”

Another reason why Zendaya inspires me is that she believes in equal rights for everyone and speaks out about very prominent subjects in society. Something she spoke about that resonated in me was the fact that Hollywood seems to prefer lighter skinned and mixed race women than darker skinned black women. And how much harder it is for black women to land roles then it is for a lighter woman. I really like the fact that she is using her platform to highlight these struggles and problems that face other people because it is what people with her type of presence should do. 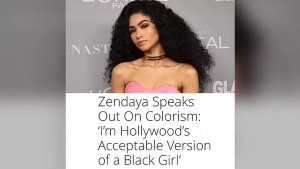 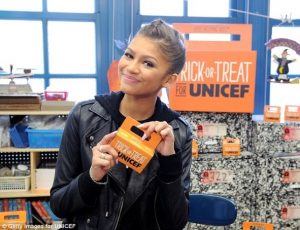 The last reason why Zendaya inspires me is that she is a philanthropist, she spent her 18th birthday raising money for the charity FeedONE with the goal to feed at least 150 children in Haiti, Tanzania and the Philippines. This isn’t her only run in with charity work. She’s also supported Toys for Tots, Friends for Change, Bookbag Drives, Operation Smile and Donate My Dress in the past. This is very inspiring to me because not many people spend their 18th birthday raising money for charity and thinking about others.